The "Inert" Powers of Placebos

Growing up with asthma my symptoms would flare up and I would end up bedridden, coughing, and wheezing all day. Yet as I waited in the patient room of my pediatrician's office, I began feeling better before the doctor examined me. The medication he prescribed reduced inflammation and relaxed the muscles of the airways, which physiologically aided my breathing.  However, my expectations influenced why I began feeling better prior to medical treatment.  There are numerous studies on various ailments where patients treated with inert medications resulted in feeling better. These inert substances in the form of pills, creams, and "sham treatments" are known as placebos. 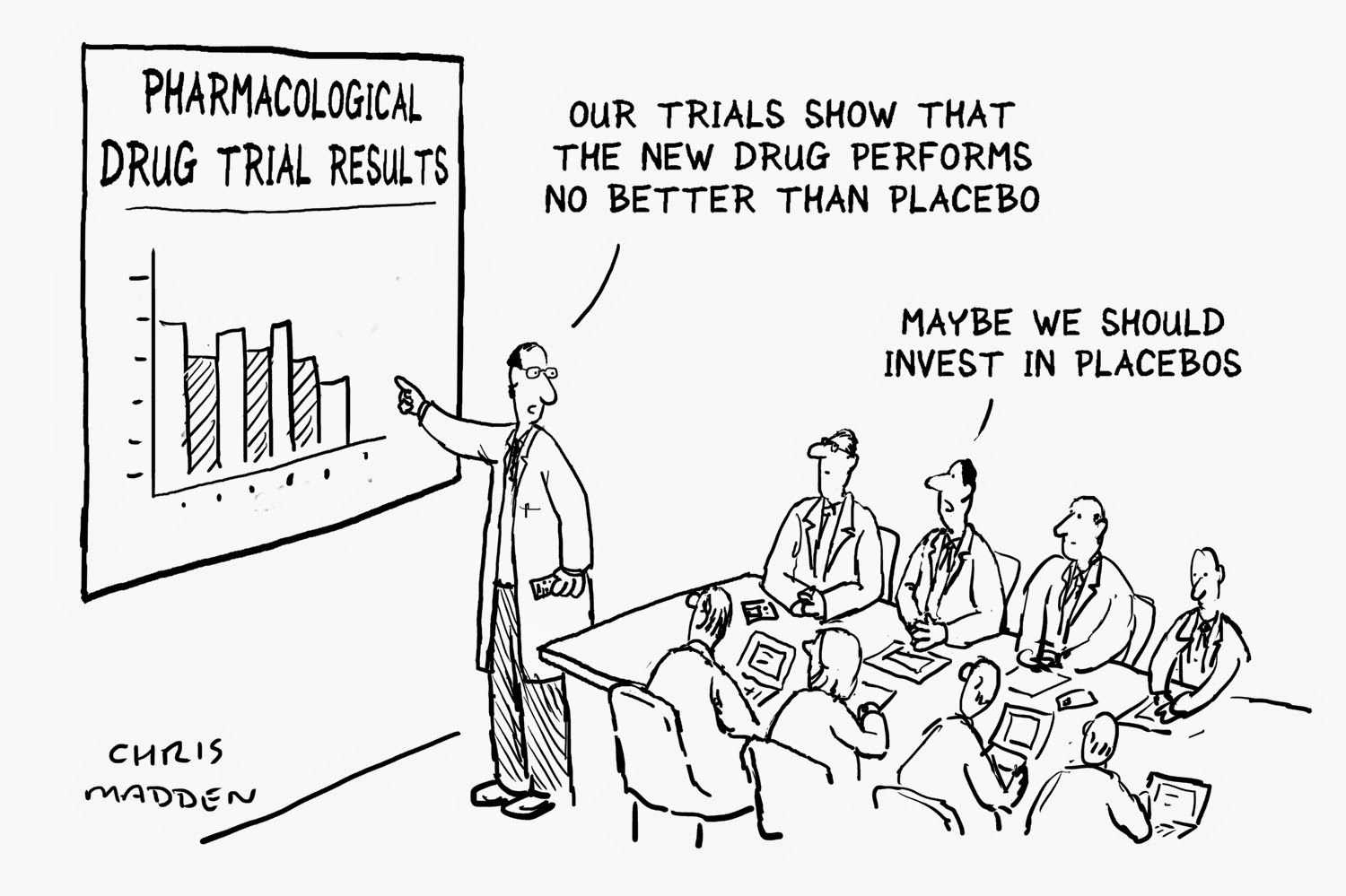 Background on the Placebo
Placebo is derived from the Latin word”placer” which means "to please" rather than to benefit (Sonawalla; Finniss et al). It has been defined as a form of medical therapy intervention to provide a psychological effect and also include medical therapies not efficacious that were thought to be at the time. In addition, placebos have also been used to eliminate observer bias in experimental settings.

Factors such as the attitude of the physician, patient suggestibility, and type of treatment can all influence the effects of placebos. Other factors involve the natural course of the disease, or biological variation in the individual. The placebo response is an apparent improvement in the clinical condition of the patient. Although placebos provide beneficial effects, they can also induce “adverse effects” when patients are previously warned of the drug side effects (Sonawalla).

Placebo Response to Pain
Placebo analgesia is the most understood type of placebo response, dating back to WWII when there was no informed consent. One of the founders investigating the effects of the placebo was Henry Beecher, an army doctor in the 1950's, who faced the problem of not having enough morphine during battlefield and told his patients he was administering morphine when it was saline, which does not have analgesic properties (Benedetti).  Interestingly, 40% of his patients claimed to experience a reduction in pain from saline treatment.

Areas in the Brain that are Affected

The first image depicts areas in the brain that process different types of pain. The second figure illustrates a meta-analysis of the active areas in the brain, represented in red, during stages of anticipation of analgesic after pain stimulation (top panel). These areas include the anterior cingulate, medial and lateral prefrontal cortices, thalamus, and hypothalamus (middle panel). Deactivations of pain activity are indicated in green (bottom panel) following the administration of placebo analgesia (Benedetti). Meta analysis is a combination of results from previous studies to compare and contrast statistical data.

Here is a short video on how endogenous opioids throughout the brain and spinal cord modulate incoming pain information. Although the jargon is technical, the overall message explains that the body produces endogenous opiates through electrical stimulation of the central nervous system.

Drug opiates such as morphine and heroine are highly effective, yet addictive. Endogenous opiates formed within the body also appear to provide similar functions when placebo is administered in some patients. The neurobiology of placebo was discovered when an opioid antagonist, naloxone, inhibited the placebo analgesic response (Amanzio and Benedetti).  The two predominating hypotheses for the placebo response are the conditioned association between active analgesic and pain relief and the reduction in anxiety resulting from the expectation of relief. 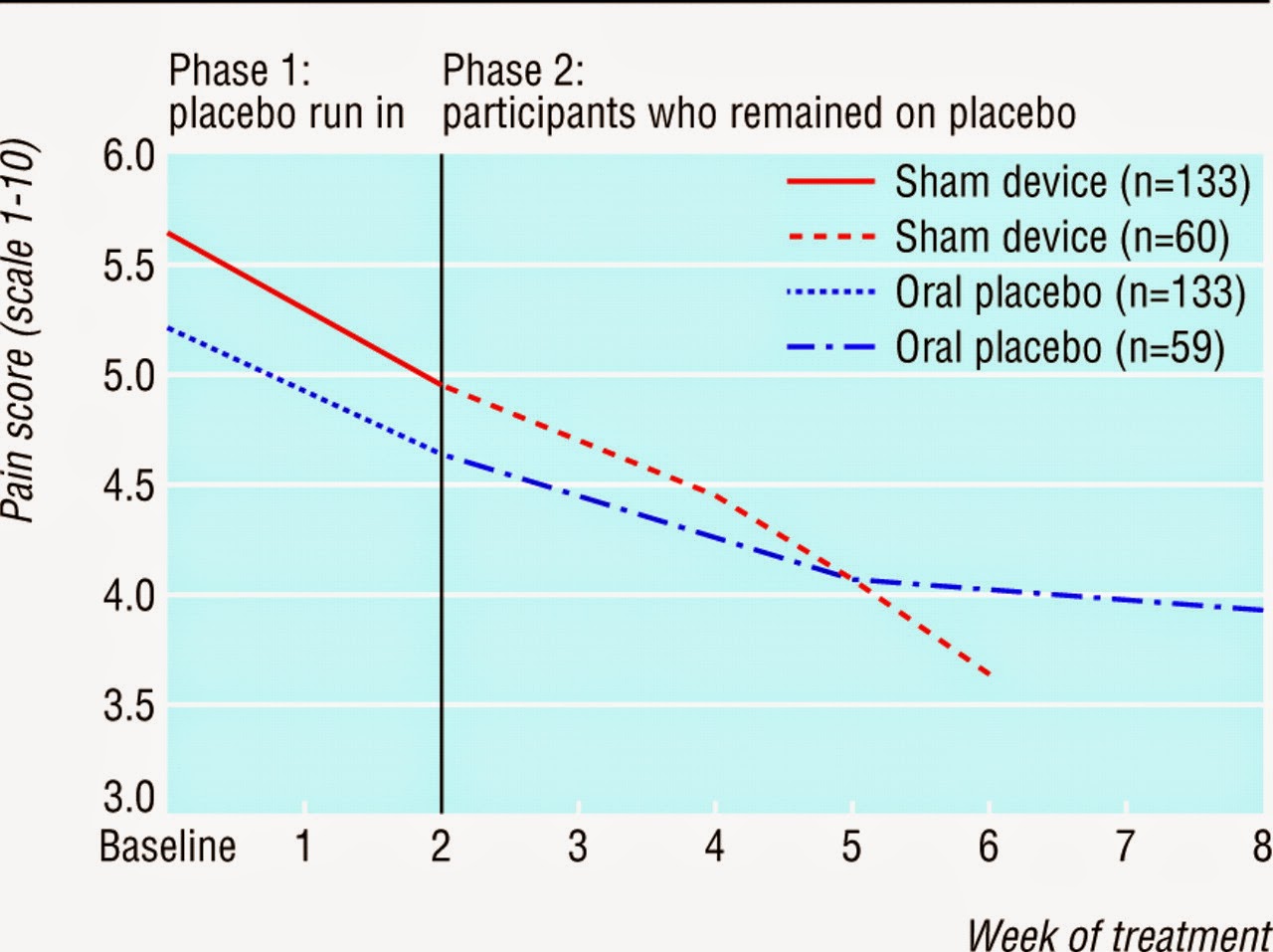 The "sham acupuncture" used needles that did not actually penetrate the skin of the patients; meanwhile the pills administered were made out of cornstarch. Compared to baseline pain category (phase 1), patients in both groups experienced decrease in pain (phase 2). 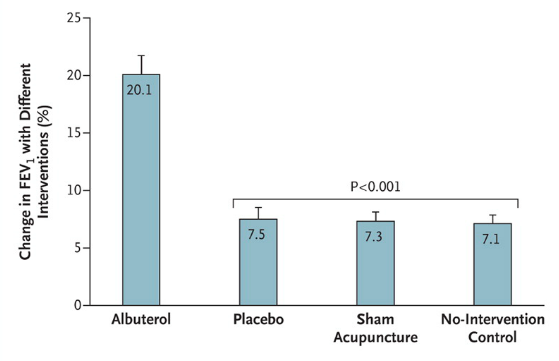 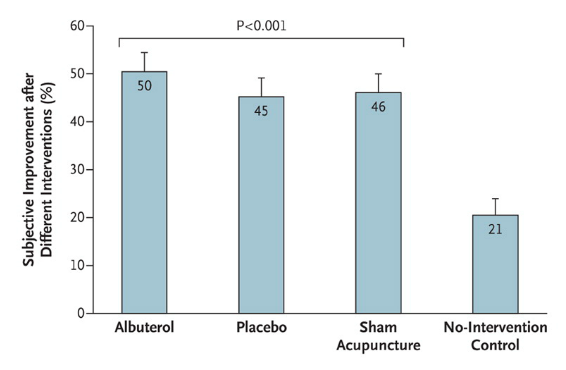 Physiologically, airway obstruction is measured by force expiratory volume in 1second (FEV1) which is measured when a patient blows onto a force expiratory maneuver.  The results from the graph show that the albuterol inhalers demonstrated a significant percent change in FEV1 (P < 0.001) compared to the other three groups (Wechsler et al).

Yet the percent change in subjective improvement for each group based on a visual analogue scale 1-10 was surprising. Patients significantly claimed to feel better in the albuterol group 50%, sham acupuncture 46%, and placebo inhaler group 45% compared to the control (P < 0.001).  Even though the placebos had no physiological effects in patients via improved airways, they perceived a reduction of their symptoms. The percentage of patients in active albuterol claiming to feel better was not significantly different to the response in patients in the two other placebo groups.


Ethical Issues with Placebos
Although I am not advocating the use of placebos in medicine, I was intrigued about the studies conducted in the field, and learned some interesting things in the process. Ted Kaptchuk, a renowned researcher in the field of placebos at Harvard Medical School, grew an interest in his study as he witnessed some patients claim to feel better before their treatment began. His value of acupuncture was not obscured, which led him to suspect that there were other contributing factors (Feinberg).  Many argue that placebos can be dangerous because they do not physiologically reduce the natural course of the disease, but simply reduce the perceived symptoms of the patients. Critics argue that patients may not seek actual medical treatment when they are set to believe that they are better when in reality, they are not.

Yet valuable outcomes of placebo studies are that they highlight multiple factors involving self-improvement which could provide a better understanding of doctor-patient interaction. Although placebos studies still require much more research before we can understand their use for medical treatment, we can infer that placebos aid in the understanding of the mechanism of drug action from the effects of suggestion, as well as for eliminating bias on the patient and observer part in clinical trials (Beecher).