The Shrimp that Can See Where UV Been.

What fearsome creatures come to mind when you think of ocean dwellers? There are a ton of creatures like the great white shark, box jellyfish, blue-ringed octopus, or stingray that would make you think twice about stepping foot in the ocean. However, there’s one particular marine organism that may evade your thoughts; one that keeps me awake at night: Odontodactylus scyllarus, or more commonly known as the Peacock Mantis Shrimp. 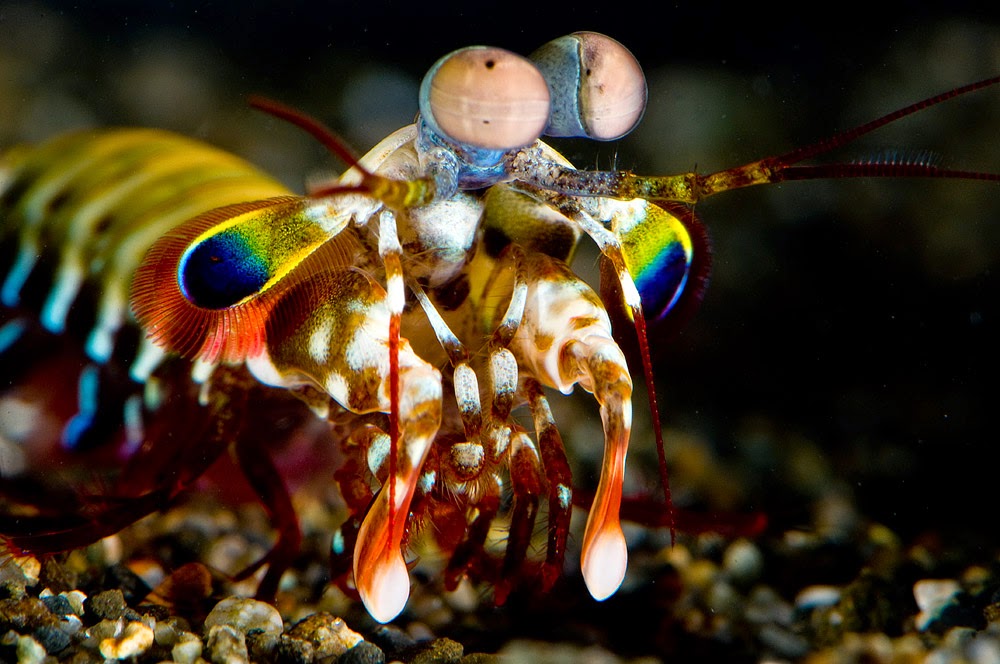 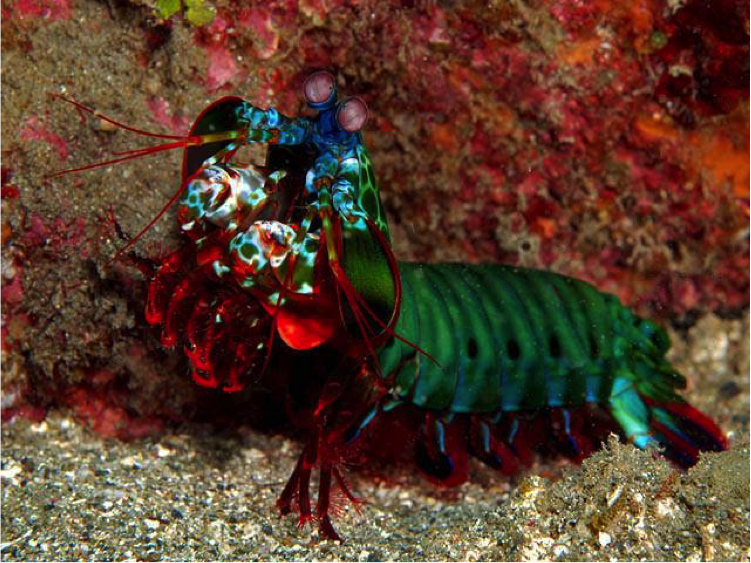 You may take a look at the mantis shrimp and laugh, because you might think that there’s no way that this shrimp could be menacing. It looks like a cartoon character with its psychedelically colored carapace and oddly shaped eyeballs. But as the saying goes, “don’t judge a book by its cover”. This mantis shrimp can pack a violent punch that can break through glass. When the mantis shrimp produces a punch a cavitation bubble forms aids in the destruction of the target. The formation does not cause the damage, but rather the collapse of the bubble. As the bubble pops tiny bolts of extremely violent energy are released in the form of heat, light, and sound can be produced. Fun fact: the temperature released from a cavitation bubble can reach up to 15,000 K!

More on cavitation bubbles with Hank Green from SciShow.

Mantis Shrimp club doing what it was designed to do. The action begins at 1:00.

What is more remarkable about the mantis shrimp than its ability to knock you out is its ability to see things you can’t. Humans have been cursed with trichromatic vision meaning that we cannot see wavelengths beyond the red-blue-green spectrum. Contrastingly, mantis shrimp have been known to possess dodeca-chromatic color space. Can you guess what that means? They have 20 receptor types, 12 of these photoreceptors are dedicated to detecting color. Does that mean these mantis shrimp have the capability to see 9 colors unimaginable to the human mind? Unfortunately, that doesn’t seem to be the case. When compared with the human eye the mantis shrimp eye works in an unconventional manner. 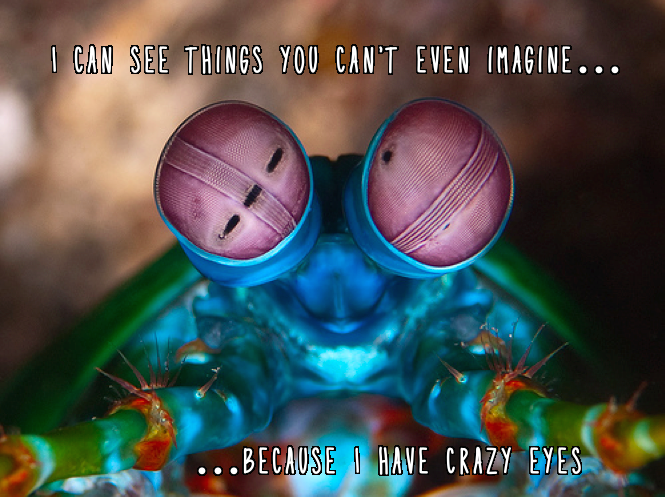 The mantis shrimp compound eye is segmented into three regions: the dorsal hemisphere, ventral hemisphere, and the mid-band. Within the mid-band are 6 distinct rows of ommatidia that have different functions; rows 1-4 are dedicated to color processing, and rows 5-6 are involved in the detection of circular or linear polarized light. In each ommatidum, light will pass through the cornea and crystalline cones. These cones converge light on to the tip of the rhabdom, a receptive structure formed by a group of 8 photoreceptive cells. It has recently been found that one of these photoreceptors, retinular cell 8 (R8), is sensitive to 5 discrete wavelengths in the UV range. (310, 320, 330, 340, and 380 nm).

So, the question is, how are these crustaceans capable of detecting UV wavelengths?  A study found that there are specific and distinct visual and filtering pigments within the eye of the mantis shrimp (Bok et al., 2014). The mid-band contained two UV visual pigments that expressed maximum absorption at 334 nm and 383 nm; however, the presence of these two pigments were not enough to explain the intricately tuned sensitivity of the photoreceptors to UV wavelengths. In an attempt to further investigate this phenomenon, they simply subjected the eye to fluorescence at a visible wavelength (375 nm) they observed something quite fascinating.


As seen in the picture above, illumination of the eye resulted in a compelling fluorescence pattern that contained 3 distinct fluorophore emissions in the mid-band (as can be seen in B-D: blue, cyan, and green).  It must also be noted that these emission patterns overlapped the pseudopupil, a dark streak in the eye that indicates the direction that the mantis shrimp is looking, which suggest that these fluorescent pigments are covering the optical path of the ommatidia (as seen in A-B). Analysis of the crystalline cones indicated that there are 4 unmistakable UV-absorbing pigments: rows 1-2, 3, 4, and 5-6 contained pigments that could be absorb maximally at 334, 372, 375, and 308 nm, respectively. (as seen in D). These UV-absorbing pigments acted as filtering pigments for the two previously noted visual pigments that could absorb maximally at 340 and 383 nm.  These UV-absorbing pigments are believed to be mycosporine-like amino acids (MAAs) which are referred to as “nature’s sunscreen”. MAAs are not synthesized by eukaryotic organisms, but the mechanism by which the mantis shrimp obtains these molecules are relatively unknown. It has been suggested that mantis shrimp consume organisms that produce their own MAAs and modify the molecules into filter pigments.

Ze Frank sums up the life of the mantis shrimp. 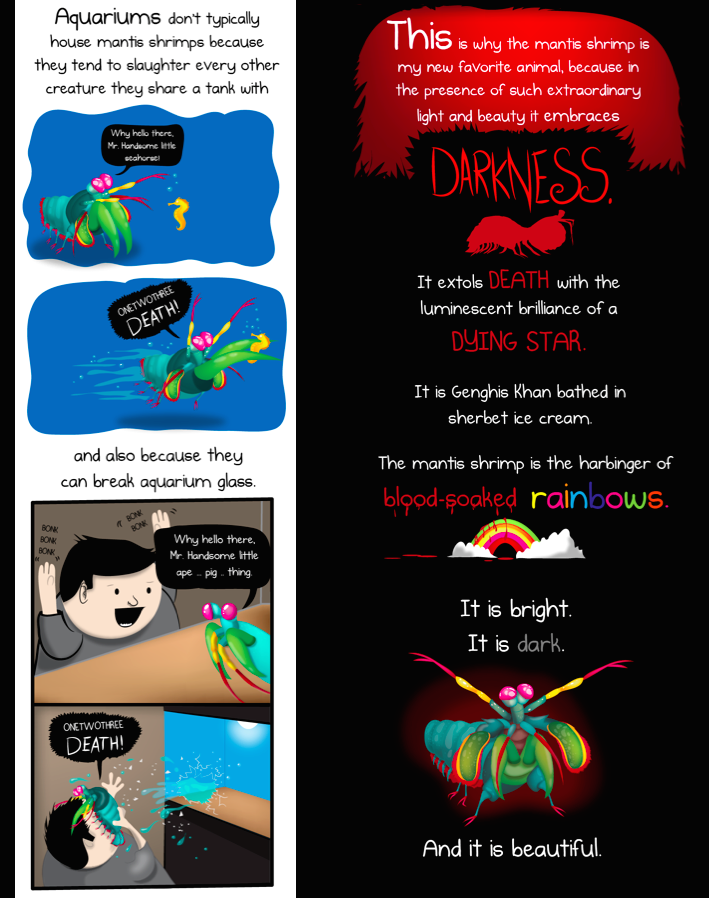 If you ever cross paths with these inanely, clown-colored shrimp just remember to pick on someone your own size, because mantis shrimp can definitely give you a “bone-splitting” sucker punch.